The St. Paul Czech and Slovak Folk Dancers are an ethnic dance group promoting the Czech, Moravian, and Slovak heritage and culture.

Our group was formed in 1962 to display Czech (Bohemian and Moravian) and Slovak culture through dance. Our costumes, or kroje, represent the dress of a number of different villages throughout both the Czech and Slovak Republics.

Contact us for performances at festivals, conferences, and holiday celebrations. We tailor our educational and entertaining program to your needs.

A Powerpoint slideshow of photos from the group’s history was prepared by Judy Stodola Metcalf, Teresa Pojar and Frank Trnka for our 50th Anniversary reunion party on September 22, 2012. It is available to view here.

Links to videos of some of our performances: 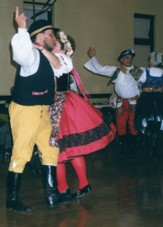 Bohemia is the westernmost part of the Czech Republic. Neighbors include Germany to the north and west and Austria to the south. Located on a plateau surrounded by mountains, the climate is very much like Minnesota. It is the most populous and industrialized region of the two republics and contains the largest city and capital, Prague.

Music from this region shows influence of German culture and has a regional flavor since trades-people going from village to village would spread the songs of their home villages wherever they went, resulting in national dances like furiant. The dances we perform from Bohemia range from the simple village dances to the music of fiddle and brass bands to the elegant ballroom dances of the upper classes accompanied by full orchestra.

Moving east from Bohemia we come to the hills of Moravia, home of the vineyards that produce excellent Moravian wines. Moravia is bordered by Poland to the north and Austria to the south. The largest city in Moravia is Brno. Culture here is more diverse, reflecting the difference between the lowlands and the pastoral culture of the Carpathian mountains. Music in the region still includes the fiddle bands, here joined by the xylophone-like sound of the cimbala or hammer dulcimer. Dances often include independent displays by the women and men, and have a slow section followed by a quick dance.

Kroj from Moravia vary as much as the geography. In the Valassko region at the edge of the Carpathian mountains, their natural produce includes hemp, linen, and wool from their flocks of sheep. Kroj from the region have felted wool vests, indigo print skirts, wooly socks and soft leather shoes. In the southern Kyovsky region we see elaborate embroidery, laces, metal and glass ornaments and painting on textiles, worn with high leather boots.

Leather was a symbol of wealth in some regions of the country. The more money you had, the longer or thicker your belt could be. Here you see our Moravian men showing off their wealth by wrapping their belts around their waists several times.

You might also notice some of the Moravian men wearing a handkerchief sticking out of their pocket. We have been told that it was a tradition that a young man would present that handkerchief to the girl of his choice after a dance. She would take it home and put it under her pillow. If she dreamt of the young man that night, he was the one she was destined to marry.

Slovakia became an independent republic on January 1st, 1993 after the so-called velvet divorce from the Czech Republic. Neighbors include Poland to the north, the Ukraine to the east and Hungary to the south. The capital city is Bratislava.

Here also we see the influence of geography on the culture. In the lowlands we hear the lively tempos of the czardas, similar to the Hungarian. In the highlands of the Tatra mountains we hear simpler pastoral music including the haunting sounds of fife and fujara, and more recently accordions and concertinas.

The kroj from the Slovak Republic also vary depending on locally available materials, from pressed wool boots and sheepskin vests in the mountains to satin skirts and leather boots in the lowlands. Predominant colors include black and gold.

One of the loveliest features of Slovak kroj is the beautiful cutwork embroidery you see on the women’s sleeves. This had a practical as well as decorative purpose. Cedar shavings were used to fill the sleeves as a sort of natural deodorant and the holes in the cutwork allowed the air to circulate through them. The men had a different solution to the problem, with their open bottomed sleeves giving them plenty of fresh air.